COULD PLANTS BE CONSCIOUS? PART 1- THINKING AND FEELING

Consciousness (noun): "The state or quality of awareness or of being aware of an external object or something within oneself."

When we think of plants and trees, let's face it- we generally just consider them as nice to look at, or nice to spend time amongst. I've generally thought this way- I do love spending time wandering dusty country back-roads, looking at the various plants and trees that are so abundant there, at the myriad colours of their leaves and flowers, and smelling the wonderful fragrances they emit.

It turns out that there may be more to plants and trees than just meets the eye, though- they seem to possess quite a few of the same capabilities that we do! They're seemingly capable of thinking and feeling, responding to emotion and stimuli, and communicating with each other.

If our consciousness is defined by our internal and external awareness, the awareness of both ourselves and of other beings and events external to us, then it seems perhaps plants and trees could be categorised as being conscious too.

CONSCIOUSNESS: WORD ETYMOLOGY, AND SOME HISTORY

The earliest use of the word consciousness in the English language dates back to the 1500's. The English word "conscious" has its' grammatical root in the Latin word "conscius" ("con"- together, and "scio"- to know)..but the Latin word did not have the same definition as our word though; it meant "knowing with", or in other words having common knowledge with another. There were also instances in Latin writings of the use of the phrase "conscius sibi", which translates as "knowing within oneself". This phrase more closely matches our modern concept of consciousness.

In medicine, consciousness is assessed by observing a patient's responsiveness, and is defined as a succession of states ranging from full alertness, through to disorientation, delirium, loss of coherent communication, and finally lack of response to painful stimuli. These degrees of consciousness are measured using behavioural observation scales such as the Glasgow Coma Scale.

Theoretical physics has contributed its thoughts also, stating that quantum theory may provide the missing pieces of the consciousness puzzle, and indeed there's the theories regarding Panpsychism which are now becoming much more prevalent, which posit that consciousness may exist at a quantum level- that each and every molecule that comprises each and every living thing could possess its own consciousness- its own mind, or mind-like quality, and is part of a larger, universal consciousness.

I could expound on the thinking of each at greater length perhaps, but as this is supposed to be an exploration of the possible consciousness of trees and plants, it's best I stick to the topic at hand!

BACK TO PLANTS AND TREES

The intelligence of plants and trees has been explored and discussed for centuries, by the likes of J.W. Von Goethe, Luther Burbank, George Washington Carver, and J.C. (Jagadish) Bose.

Further analysis since the turn of the new millennium is finding that plants and trees have highly-developed neural systems, and that they make and utilise neurotransmitters that are identical to ours. Perhaps they're aware- conscious. It's certainly being considered, to quite a decent degree, by various scientists.

In order to illustrate some of the many examples I've come across during my research into this topic, I'll try to break those down into different categories (although some examples may fit into a few): thinking and feeling, communication, and response to emotion and stimuli. The examples may not necessarily fit into any of the philosophical or theoretical notions of consciousness, but they do seem to at least fit the basic dictionary definition.

In Part 1, I'll explore thinking and feeling in plants, and the rest of the categories will follow in Part 2- to put all the categories into one piece may have proven too long a read for you, as there's a lot to consider!

Many people perhaps think of plants and trees as not being sentient.

"The new view, by contrast, is that plants are dynamic and highly sensitive organisms, actively and competitively foraging for limited resources both above and below ground, and that they are also organisms which accurately compute their circumstances, use sophisticated cost-benefit analysis, and that take defined actions to mitigate and control diffuse environmental conditions. Moreover, plants are also capable of a refined recognition of self and non-self and this leads to territorial behavior. This new view considers plants as conscious, information-processing organisms with complex communication throughout the individual plant, including feelings and perception of pain, among other things.

Plants are as intelligent and sophisticated in behavior as animals but their potential has been masked because it operates on time scales many orders of magnitude longer than that operation in animals..

Owing to this lifestyle, the only long-term response to rapidly changing environments is an equally rapid adaptation; therefore, plants have developed a very robust communication, signaling and information-processing apparatus..Besides abundant interactions with the environment, plants communicate and interact with other living systems such as other plants, fungi, nematodes, bacteria, viruses, insects, and predatory animals."

On that note, let's get to the first section shall we?

Plants and trees are self-organised systems. They are constantly sensing, feeling, and monitoring their internal and external environments for changes in incoming information. If they are focusing externally for example, and notice a change, they work to identify its nature and meaning, and its possible impact on them. They then devise a response. Anthony Trevawas expands on this thought in his book "Plant Behaviour and Intelligence", stating:

“A plant actually chooses the optimum response from a plethora of alternatives. Responses can be rejected; the numbers of different environments that any wild plant experiences must be almost infinite in number. Only complex computation can fashion the optimal fitness response.”

The first thing to consider with trees and plants is that it is their root system that forms their neural network- their "brains". The "pretty part" of plants and trees- their leaves and canopy, is the part that engages in waste excretion and reproduction.

For humans and animals, it's the other way around; if we look at plants and trees in the same way as we look at our anatomy, it could be said that they live with their heads in the ground and their asses in the air!

If we take a cutting of a plant, or plant a tree sapling, its neural network begins to develop in the soil. It analyses and feels its new surroundings, and as it learns these it alters the shape and formation of its emerging roots, and also alters the shape of its "body" in order to best suit the environment in which it now grows. In short, it is analysing data and generating a response.

Goethe noted this in his 18th-century treatise on botany, "The Metamorphosis of Plants", where he observed, and drew, plants of the same species that were growing in different environments, calling attention to the difference in shape in the formation of their stems and leaves.

Some plants, such as the Sundew, are so sensitive to touch that they can detect a strand of hair weighing less than one millionth of a gram, to which they then respond. If you were to touch a Mimosa plant (also called the Sensitive Plant), its leaves will fold up like an old-fashioned handheld fan. 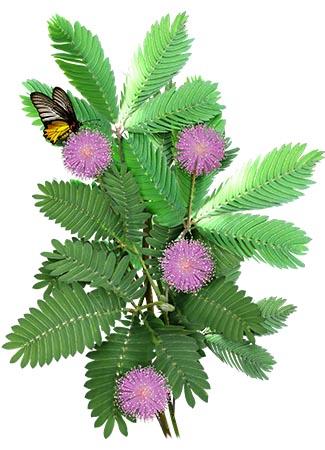 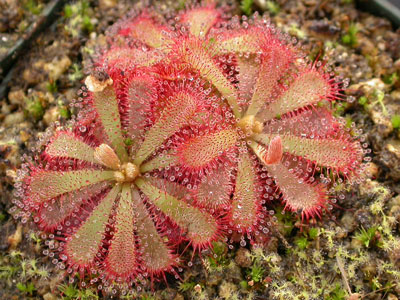 A Mimosa plant, and a species of sundew plant

On the other hand, raindrops produce no response in plants, even in those with highly sensitive leaves. Rain is a normal experience for plants and trees, after all. Again, this seems to indicate that plants and trees display intelligence, in the way that they can differentiate between what is touching them.

Scientists already know that plants are sensitive to touch of any kind- they have a word for this, and the word used for this phenomenon is "thigmomorphogenesis".

A recent study, conducted by Leipzig University and the German Center for Integrative Biodiversity Research, discovered that Beech and Maple trees can recognise the difference between whether their buds are nibbled off by a browsing Roe deer, or have been torn off by a storm or by human hand.

For this next consideration, I have Brandon Massullo to thank- yet again- as it was his book that drew my attention to it, and thus made me curious.

In 1944, Harold Saxton Burr, Professor of Anatomy at Yale University, and researcher in bio-electrics, used sophisticated (for the time), self-designed microvoltmeters to conduct experiments on trees in two different areas of Connecticut. Microvoltmeters measure voltage- energetic output- on the scale of microvolts (mv); one microvolt equals one millionth of a volt.

Burr took continuous readings on the trees over the course of a year, with the intention of recording the effects of cosmic forces on living systems.

The information I find applicable here lies in the readings taken over the course of 4 days before a hurricane struck the areas the trees were located in.

"If these extraordinary potential shifts had been recorded in only one tree, little could have been made of them. But parallel changes occurred at the same time in both an old and a young tree, 40 miles apart. This suggested a causal relationship between the electric conditions of the troposphere, the hurricane, and the fields of living systems."

For my mind, it also perhaps shows a sense of thought in trees- the detection of a change or a threat in their external environments, and a response to it. After all, we human beings would do likewise if we detected a change or a threat in our external environments- we would respond in some manner. Were the increased readings also perhaps due to the trees sending out warning or distress signals to other trees? I can't say for sure, but they could well have been. (If you're interested in Burr's work, I've provided a link above to his book "Blueprint for immortality" above.)

That's a little on how the behaviour of plants and trees may demonstrate thought, but what about how they may show feelings?

Jagadish Bose conducted an experiment in 1914 that again seems to show the ability of plants to feel, and respond. In an edition of "The Nation", a journalist wrote of witnessing the experiment:

“An unfortunate creature is strapped to the table of an unlicensed vivisector. When the subject is pinched with a pair of forceps, it winces. It is so strapped that its electric shudder of pain pulls the long arm of a very delicate lever that actuates a tiny mirror. This casts a beam of light on the frieze at the other end of the room, and thus enormously exaggerates the tremor of the creature. A pinch near the right-hand tube sends the beam 7 or 8 feet to the right, and a stab near the other wire sends it as far to the left. Thus, can science reveal the feelings of even so stolid a vegetable as the carrot."

Bose conducted many experiments on the ability of plants and trees to feel- the noted playwright George Bernard Shaw, who was also a vegetarian, apparently became quite visibly distressed upon witnessing an experiment which recorded the throes of agony of a cabbage as it was boiled. The results of these experiments were published in Bose's 1902 book, "Response in the Living and Non-Living".

Plants and trees, it seems, are quite demonstrably capable of discerning and responding to change in their internal state of being, and their external environment.

If these actions in some way fit in to the concept of consciousness, perhaps plants and trees do fit the bill. I certainly do think the concept worthy of consideration!

This will be the first of two parts on this topic- there was a little too much to discuss to put everything into a single piece! Do stick around for part 2, and in the meantime feel free to share your thoughts on the topic in comments!

GHOSTS- IN OUR GENES?

I HAD THE STRANGEST DREAM..